Back to all posts

Taking the Body for Granted

Don't we?  Don't we just assume the eye is going to blink, the heart is going to beat, the tear duct is going to moisten, whatever.  I mean, I know some of us have had health problems, but even then, the parts of us that don't have problems-- well, we just sort of wake up and do our thing and go to bed again and assume all those other parts are going to keep working, right?  We hardly even think about it, do we?  I don't.

These days, I've been a "little disappointed" (one might hypothesize, if one knew my mind, that this is the understatement of the year) in the 'Body' of Christ, His Church, His Bride.  I can't seem to make sense of political affiliations that put Americans above all of God's children because the Truth is that we are ALL one.  (In case you think I'm spouting nonsense, you can look it up yourself in Galatians 3:28: "There is neither Jew nor Greek, there is neither slave nor free, there is no male and female, for you are all one in Christ Jesus.")

The converse is also true... some of my friends, which seem to be of a similar political mind, are filled with vitriol for anyone who has a different view.  The thing is, I don't think this criticism- justified or not- is going to move anyone closer to God.  I can only speak from my experience, but I have only moved closer to God through messages of LOVE  because GOD IS LOVE (No literally, I'm not kidding: 1 John 4:8 "...God is love.") Certainly not through messages of FEAR...

And while I, too, have been and remain critical of His Church, (pausing here a second, am I critical of the Church or of the media's representation of it, OR just of the stuff I know about... because I do good things sometimes, but I don't always tell social media, but doesn't it still count???)

Back to my point though, I was just today moved to tears about how powerful, even when dysfunctional, this Church-- this Body is.

First, I learned that my local church, in a limbo state for over a year, has approved unanimously by the Council, the recommendation for a candidate to serve as our head pastor.  I mean, JUST THIS MORNING, I was begging God to send us a Leader, so LET ME TELL YOU MY FRIENDS, this news is one of those "joyful tears" moments.  While our interim pastor has been a Godsend and while our only other pastor on staff has literally saved my sanity, WE NEED MORE LEADERSHIP.  And this new leadership has come in the form of someone who shares our value that "All Means All" when we welcome you to the communion table... And so it seems to me, in the conservative South, that His Body is so strong... 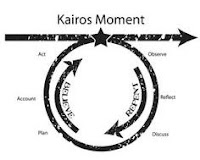 On another note (pun intended), and faced with other petty problems, I have struggled with my musical identity this last year.  Working the Kairos circle with my trusted Christian friend, I decided to take a break-- to silence the voice my God gave me and to just BE.  As someone who sees my identify as a part of this gift I have been given, I have struggled with how others perceive the decision, but never the decision itself which has always felt inspired by God.

Without going into the terribly #firstworld details, I was having a rough day today and another element of His body lifted me up.  Two much-more-talented-than-me musicians I only know because of my church, were, through every wile I possess, somehow convinced to work with me on a short-term project.  This persuasion has resulted in an original song being completed by one of them, and arriving in my email tonight, I have heard no sweeter sound.  His Body is calling me back home... 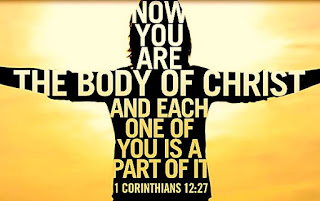 And so He spoke to me, and so I share with you.  This Body needs US to quit acting like its infected with an autoimmune disease.  The last I checked, we have all sinned and fallen short of the Glory of God.  Quit attacking each other and listen to how God wants to use us to Heal, Restore, Help, and Love in our communities.  Quit thinking we are not bigoted or racist and LISTEN, no matter the color of our skin, but seriously white people, I'm talking to you.  AND quit judging the other sinners in the pews (if needed, please refer back to that whole 'we have all fallen short' thing I mentioned earlier.)

AND for the LOVE of GOD (literally...) QUIT tearing down His GREAT AND AWESOME Body because YOU are a part of it.

I love you... especially because "in that way, the parts of the body will not take sides. All of them will take care of one another. "
~

27 You are the body of Christ. Each one of you
1 Corinthians 12:12-27 12 There is one body, but it has many parts. But all its many parts make up one body. It is the same with Christ. 13 We were all baptized by one Holy Spirit. And so we are formed into one body. It didn’t matter whether we were Jews or Gentiles, slaves or free people. We were all given the same Spirit to drink. 14 So the body is not made up of just one part. It has many parts.

21 The eye can’t say to the hand, “I don’t need you!” The head can’t say to the feet, “I don’t need you!” 22 In fact, it is just the opposite. The parts of the body that seem to be weaker are the ones we can’t do without. 23 The parts that we think are less important we treat with special honor. The private parts aren’t shown. But they are treated with special care. 24 The parts that can be shown don’t need special care. But God has put together all the parts of the body. And he has given more honor to the parts that didn’t have any. 25 In that way, the parts of the body will not take sides. All of them will take care of one another. 26 If one part suffers, every part suffers with it. If one part is honored, every part shares in its joy.